This summer, we decided to get involved in something we could do together, so we joined Bible Alive Theater for their production of "Rahab." Gymnast was acting in two parts, Dancer worked lights and some sound, and I was backstage - mostly to keep Gymnast in line. 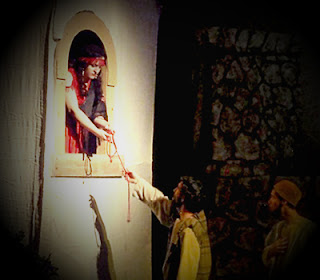 We had so much fun! Gymnast had a mini-meltdown, as she usually does when she has a hard time anticipating the unknown. After her second part in the first show though, she came running backstage saying, "I did it! I really did it! Mom, you were right. I was scared, but then I went and said it, and I wasn't scared anymore!"

This was her after her pronouncement: 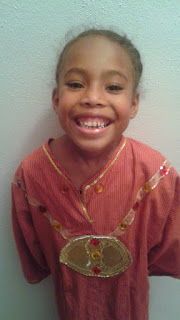 What an amazing smile! And her confidence is not lacking, lol! Dancer enjoyed herself as well and was telling me of how she created the effects of fire and trembling with the lights.

After the summer performances, the group does different workshops throughout the year. Gymnast has stated she would like to do the acting classes. This, from the child who kept telling me in no uncertain terms to NOT put her in ANYTHING ELSE. Not even soccer(!!!!).

Hopefully, this will be an activity we can continue to do together this year.

Renai
We are a bilingual, bicultural homeschooling family. I started homeschooling the oldest in Spanish and English in 2004, and am starting the journey again with the youngest. I am a licensed teacher with endorsements in teaching Spanish as a first and second language, reading, and TESOL. Although having learned Spanish as a second language, I have taught bilingually both at home and in school settings for over nine years. I currently homeschool early elementary and high school.